ALL ABOUT THE ACHILLES TENDON 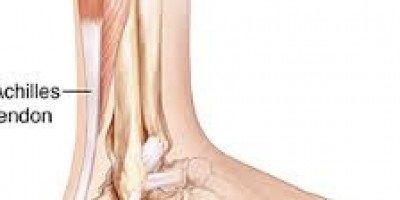 ALL ABOUT THE ACHILLES TENDON

The Achilles Tendon is made up of the tendinous fibres from three contributing muscles, that are commonly referred to as the calf, which is situated at back of the lower leg. The major  muscles are called the gastrocnemius and under it is the soleus allow flexion of the knee and plantar flexion of the ankle, the very small plantaris muscle is also part of this muscle group and  also serves to stabilize the knee and feeds back to the nervous system regarding orientation of the lower leg.

These muscles are connected to the heel via tendons that join together to form the Achilles Tendon. The Achilles tendon has a round upper part and is relatively flat in its distal 4 cm. The fibres of the Achilles tendon are not vertical, but spiral 90°. This arrangement increases the tendon elongation and helps the release during locomotion of the energy stored within the tendon.

The Achilles tendon is enveloped by a paratenon, a membrane consisting of two layers: a deeper layer surrounding and in direct contact with the epitenon, and a superficial layer, the peritenon,which is connected with the underlying layer through the mesotenon. The paratenon originates from the deep fascia of the leg, the fascia cruris, covering the tendon posteriorly.

Blood flow is quite limited through tendons. A recent study using an imaging method called laser Doppler flowmetry showed that the blood flow was considerably lower near the calcaneal insertion at the heel but otherwise was distributed evenly in the tendon.

WHAT IS THE ACHILLES TENDON MADE OF..?

As mentioned earlier the Achilles tendon is formed by the tendons of the calf muscles that attach those muscles to the bone. But it is not the same as muscle tissue. Tendons have a different make up which I will discuss below.

Tendon tissue is made up mainly of cells known as Tenocytes and tenoblasts (comprise 90–95%). Chondrocytes, vascular cells, synovial cells, and smooth muscle cells form the remaining cellular elements. The extracellular tendon matrix is composed of collagen and elastin fibres, ground substance such as proteoglycans, and organic components such as calcium.

Microscopic fibres called collagen fibrils are bundled into fascicles containing blood, lymphatic vessels, and nerves and have been shown to interchange between fascicles. The fascicles, which are surrounded by the endotenon, group together to form the gross structure of the tendon. The tendon is enveloped by a well defined layer of connective tissue, the epitenon. This, in its turn, is surrounded by the paratenon, with a thin layer of fluid in between to reduce friction during tendon motion. The innermost layer of the epitenon is in direct contact with the endotenon.

FUNCTION OF THE ACHILLES TENDON

Actin and myosin proteins are present in tenocytes,and tendons have almost perfect mechanical properties for the transmission of force from muscle to bone. Tendons are stiff and resilient, with high tensile strength: they can stretch up to 4% before damage. Achilles tendons in men have higher maximum rupture force and stiffness with a larger cross sectional area than in women, while younger tendons have significantly higher tensile rupture stress and lower stiffness.

The Achilles Tendon, on average, can withstand up to 17 times bodyweight force..

The main cause of tendon injury for the tendon is Excessive loading during vigorous training activities by either inflammation of its paratenon or degeneration of its body, or by a combination of the two. Damage can also occur even if it is stressed within its physiological limits when the frequency of microtrauma applied does not leave enough time for repair. Microtrauma can also result from stress within the Achilles tendon from different individual force contributions of the different calf muscles, producing abnormal load concentrations within the tendon and frictional forces between the fibrils, with localised fibre damage.

Changes in training pattern, poor technique, previous injuries, footwear, and environmental factors such as training on hard, slippery, or slanting surfaces are extrinsic factors that may predispose the athlete to Achilles tendinopathy.

Recently, changes in expression of genes important in cell-cell and cell-matrix interactions in Achilles tendinopathy have been reported, which may play an important part in the regulation of tendon extracellular matrix degradation and tissue remodelling.

Tendinosis is defined by Jozsa and Kannus as intratendinous degeneration—that is, hypoxic, mucoid or myxoid, hyaline, fatty, fibrinoid, calcific, or some combination of these—from a variety of causes (ageing, microtrauma, vascular compromise, etc).

Histologically, there is non-inflammatory intratendinous collagen degeneration with fibre disorientation and thinning, hypercellularity, scattered vascular ingrowth, and increased interfibrillar glycosaminoglycans. Leadbetter proposed that tendinosis is a failure of cell matrix adaptation to trauma because of an imbalance between matrix degeneration and synthesis. Macroscopically, the affected portions of the tendon lose their normal glistening white appearance and become grey and thickened .

The paratenon can be involved in the early phases of tendinopathy, and may present as “peritendinitis crepitans” due to adhesion between the tendon and the paratenon.

Histologically, tendinosis shows partial disruption in tendon fibres. Tendinosis can be asymptomatic—for example, most patients with an Achilles tendon rupture did not have a clinical picture of tendinopathy before the rupture, and only histology reveals the profound intratendinous changes. Tendinosis may also coexist with symptomatic paratendinopathy.

The source of pain in tendinopathy is still under investigation. Classically, pain has been attributed to inflammatory processes, however research shows tendinopathies are degenerative not inflammatory conditions, recently the combination of mechanical and biochemical causes is accepted.

Tendon degeneration with mechanical breakdown of collagen and release of  chemical irritants and neurotransmitters may generate pain in tendinopathy.

The commonest form of tendon healing is by scarring, which is inferior to healing by regeneration. A tendon heals in essentially the same way as soft tissue, going through the same inflammatory (1–7 days of injury), proliferative (7–21 days), and remodelling (three weeks to one year) phases. Tendons are biochemically and metabolically less active than bone and muscle.

Healing tendons have 80% of the collagen and 60% of the collagen cross links (hydroxypyridinium) of normal tendons. Healing tendons yield more soluble collagen than intact tendons. Recovery from tendon injury is slow because of many factors, including low oxygen consumption, slow synthesis of structural protein, and excessive load. The oxygen consumption of tendons is 7.5 times lower than that of skeletal muscles, and tendons are able to sustain loads of up to 17 times body weight. Recent studies have shown that the healing capacity of tendons may have been underestimated.

In the acute phase of healing, rest from the activities that caused the symptoms is recommended.. In mild tendinopathy, relative rest or modified activities are prescribed. This initial deloading allows collagen fibres repair, and remodelling is stimulated by gradual and specific tendon loading.

Physiotherapy treatments for tendinopathy include deep friction massage and stretching to restore tissue elasticity and reduce the strain in the muscle-tendon unit with joint motion. Soft tissue release and shockwave electrotherapy have been successfully used in the treatment of chronic tendinopathy. Gentle static stretching by pulling, holding, and releasing the gastrocnemius-soleus complex is the best way of stretching.

Eccentric strengthening of the gastrocnemius-soleus muscle and loading of the Achilles tendon are important for both prevention and conservative management of Achilles tendinopathy. As a rule, gentle strength training should be started early after injury to prevent disuse atrophy, and should not be painful.

At Physiocare we can guide you through the rehabilitation process of your Achilles Tendinopathy and optimise your recovery. We are Chartered Physiotherapists with specialists in orthotics, exercise rehabilitation and have electrotherapy available in our clinics to optimise your recovery. We will assess your specific injury and discuss the treatment choices with you. We will work together to achieve your goals and get you back on track.