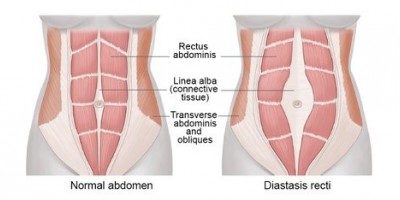 What is a Diastasis Recti?

A diastasis recti is where the linea alba widens more than the average anywhere along its length. Ultrasound studies have examined the average distance at three standard points along the linea alba – at the bottom of the sternum, 3cm above the umbilicus (bellybutton) and 2cm below the umbilicus. Though there can be great variability, widths wider than 7mm (+/-5mm), 13mm (+/-7mm), and 8mm (+/-6m) respectively are considered abnormal.

What is the Linea Alba?

We have four layers of abdominal muscle – the transversus abdominis, internal and external obliques, and the rectus abdominis. The linea alba is the midline fibrous band that runs from the bottom of your sternum (breastbone) to your pubic bones and separates the two rectus abdominis muscles. In layman’s terms, the linea alba is the line that runs down your abdomen between the two eight-pack muscles. It is made up of a highly organised network of collagen fibres, structured in such a way as to allow transfer of forces between both sides of the abdomen and still allow for expansion of the abdominal wall during pregnancy.

How common is it?

What can be done?

Specific exercise based rehabilitation during the antenatal period has been shown to reduce presence of diastasis recti by up to 35%. Rehabilitation should focus on postural and movement retraining, improving trunk muscle control and strengthening the lumbopelvic muscles. Other potential interventions or approaches include maternity support garments, which can also be used in conjunction with a physiotherapy-led rehabilitation programme but should generally not be used in isolation. For the linea alba soft tissue to repair and strengthen properly, it needs to be appropriately loaded and exercised – much like the rehabilitation of ankles after a ligament sprain.

Surgery can also be considered for repair of persistent diastasis recti, and a consult may be sought 1 year postpartum but is generally not advised prior to this.

Click/Tap here to Book an Appointment with Sarah