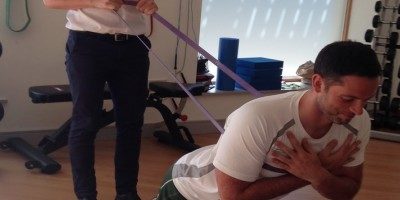 Hamstrings; we all have them and we’ve all heard of them. Hamstring injuries have plagued many a great sport star’s career. When you see a player arrive with a hamstring injury at a sporting event their face is often the picture of despair rather than pain. One of the most emotional hamstring injuries in sporting history is Derek Redmond’s from the 1992 Olympics in Barcelona. Hamstring injuries don’t care who you are – the great Usain Bolt was cruelly robbed of a fairytale ending to his career when he abruptly pulled up in the anchor leg of the recent 4x100m final clutching the back of his leg.
[one_half][/one_half]
[one_half_last][/one_half_last]

Recent research shows that hamstring injuries are the most common injury in elite level Gaelic Football. They are also the most common muscle related injury in soccer and are becoming even more prevalent in the professional game with a 4% increase over a 13 year period (2001-2014).  Often when a hamstring injury comes up in a conversation, they are described with the following adjectives – tight, dodgy, niggly (with the odd few expletives thrown in for good measure). Unfortunately a lot of us know only too well what an annoying injury a hamstring tear/strain can be. At times it can feel like the unshakable injury. Depending on what research you read, the recurrence rate of hamstring injuries ranges from between 12%-63%. Research also states that the first month of returning to play is the highest risk time of recurrence and that you are still at risk up to twelve months following the injury.

Taking all that into account, a muscular injury doesn’t happen for no reason – they occur as a result of both intrinsic and extrinsic factors. Intrinsic factors refer to those variables inside/within the body; whereas extrinsic are factors external to the body. Common intrinsic factors are flexibility, muscle imbalances, fitness levels, age, weight/size, previous injury and nutrition and sleep. Some examples of extrinsic factors are coaching, improper technique, equipment/clothing and weather or environmental factors. When rehabbing any muscular injury the treating therapist should always investigate what potential factors contributed to the injury. Once these are identified, the therapist should address and fix these and also educate and empower the patient to recognise these factors in the future to reduce the risk of recurrence.

In this blog I’m going to focus on one exercise – Nordic Hamstring Curl (NHC). The NHC is one of the most popularly prescribed hamstring exercises. It is an exercise that I have a love-hate relationship with. On paper it’s great as it ticks a lot of boxes – it’s simple, you don’t need fancy gym equipment or space and it eccentrically loads the hamstring (loading the muscle in a lengthened state). It is widely accepted and researched that eccentric strength training is an important component when rehabbing a hamstring injury. I don’t like the exercise because I feel we aren’t getting the full benefit out of it. Not only are we not getting the full benefit from it, we’re arguably having a detrimental effect because we’re only strengthening in ranges of motions where people are already strong and thus creating more of an imbalance (intrinsic factors). The reason the NHC can be ineffective is because too often people are struggling to perform NHC correctly. When doing a NHC the aim is to slowly lower your torso to the floor, maintaining a neutral trunk and pelvis as you lower. Where people go wrong is halfway through the movement, when their hamstrings fatigue they will either drop to the floor or compensate by flexing their trunk. There is recent research by Matthews et al from 2015 which supports a technique of using a resistance band to create an assisted NHC. To do this place a resistance band around the participant’s torso and have them do the exercise as before (see photos below taken in the Carrickmines PhysioGym which feature me (Andrew Cullinane MISCP) in a support role for the exercise). This extra support should allow them to lower effectively and strengthen through their full range of motion.

Overall hamstring injuries can be complicated. You must weigh up all the factors that could have contributed to your injury and ensure your rehab programme is specific and targeted to your own needs. The NHC is just one possible area where you might be going wrong. If you want any further advice, or are struggling to shake off your injury please contact us and see if we can help. Call us on 015310007 to book your appointment to get and feel better at PhysioCare.