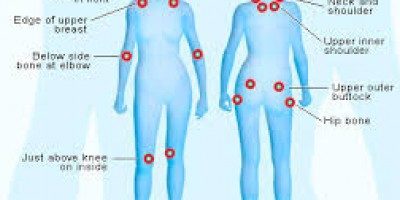 Fibromyalgia is a chronic pain disorder that is characterized by widespread musculoskeletal pain throughout the body that has been ongoing for over 3 months duration with no other disorder that can otherwise explain the pain. Other hallmark features of fibromyalgia include disturbance in sleep, physical exhaustion, mood disturbance and cognitive difficulties. It is estimated to affect around 2-4% of the general population and it can develop at any age, with women twice as likely to suffer from fibromyalgia than men.

Fibromyalgia can occur in isolation, but often co-occurs with other conditions with similar underlying pathophysiology (such as irritable bowel syndrome, interstitial cystitis, and tension headaches). It can also often be found as a comorbidity in individuals with diseases characterized by ongoing peripheral damage or inflammation in the body (for example autoimmune disorders and osteoarthritis).

How does it happen?

There can be several reasons as to why an individual might develop fibromyalgia. The condition can be triggered by certain infections such as the Epstein-Barr virus, Lyme disease, Q fever, and viral hepatitis. Other triggers also include trauma as well as psychological stress. All of these triggers can have a similar effect on the neurotransmitters in the brain as with fibromyalgia. There may also be a strong genetic link with first-degree relatives of patients with fibromyalgia reported to be up to 8.5 times more likely to have the condition.

While there is currently no cure available for fibromyalgia, the condition can be managed very successfully through both medication and non-pharmacological treatment modalities.

Guidelines recommend that a multidisciplinary approach should be used when treating individuals with fibromyalgia using a combination of treatment modalities with the aim of improving health-related quality of life. Treatment should be tailored specifically to the pain intensity, function, associated features, preferences and comorbidities of each individual patient.

Currently the only strong evidence found for the management of fibromyalgia in the literature is for aerobic and strengthening exercise. There is unanimous evidence across the board in strong favour of the use of exercise in the treatment of fibromyalgia given its effect on pain, physical function and well-being as well as its availability, low cost and lack of safety concerns. Aside from exercise there is moderate evidence for the use of other therapies such as cognitive behavioural therapy, acupuncture, hydrotherapy, qigong, yoga, tai chi and mindfulness-based stress reduction.

Many medications can also help with the management of fibromyalgia, however guidelines recommended that initial management should focus on non-pharmacological therapies such as those listed above prior to medical management.

A full comprehensive medical exam must be undertaken by a suitably trained physician prior to diagnosing fibromyalgia.

Fibromyalgia is a complex condition characterterised by widespread chronic pain and fatigue. While there is no cure, symptoms can be managed very successfully and management should be multimodal and tailored specifically to each individual. Currently the only strong evidence in the research is for physical activity in the management of fibromyalgia which is why physiotherapy can play an important role in the management of symptoms.